Electric gates and entry systems for security and peace of mind.

Huge range of styles and materials to suit any location. 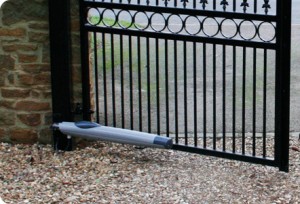 The ATI motors are extremely strong and able to cope with heavyweight gates. The strength of the ATI motor is achieved by the irreversibly geared worm drive mechanism.

A common application for the ATI series would be to operate a traditional five bar wooden gate. A situation in which the ATI series is very useful, is a pair of closed-in boarded gates in an exposed position, where the force of the wind will pose no problems to the strength of the ATI.

The ATI worm drive electric gate operator is a cost effective and efficient way of automating your gates. 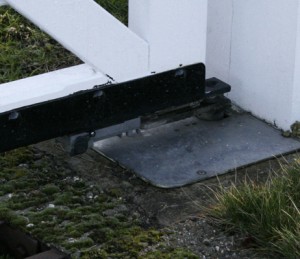 As its name implies, this high quality electric gate opener is designed to operate in damp, below ground-level conditions. It is indeed the most popular machine with the discerning customer , who not only wants a long lasting reliable gate machine, but also does not want to see any type of armature attachment on the inside of the gates. The FROG automation system can be fitted to new gateways or most pairs of existing gates that you may have.

The FROG gate kit will operate gates up to 3.5m each leaf regardless of which way hung and of hinge geometry.

The underground gate motors can be operated by all the standard accessories e.g. remote controls, push buttons, keypads etc. In the eventuality of a power cut the FROG system has a key operated manual release mechanism which is conveniently situated on both the inside an d outside of the gateway. The FROG system is designed to automate either metallic or wooden gates and in every case the pivot arm becomes the bottom hinge for the gate. Once correctly installed, there is no apparent sign of the mechanism other than the lid of the foundation casing box, and it does not detract from the overall aesthetics of an attractive gateway.

Gallery of some previous work we have done with Below Ground (Frog) Operation.

Using a remote control or the keypad to open the gates to gain access. There is also an intercom for visitors to request the gate be opened from the house.

When leaving the property, the induction loop sensor detects the approaching vehicle and automatically opens the gates.

The most popular electric gates system with the discerning customer , who not only wants a long lasting reliable gate machine, but also does not want to see any type of armature attachment on the inside of the gates. This automation system can be fitted to new gateways or most pairs of existing gates that you may have.